Get Check it Again

All of the examples in this book are adapted from actual examples of English that I have spotted during the past twelve months. This is English as written by people who speak and write English as their first language (and, no doubt in many cases, their only language). Educated people. People who have, in most cases, enjoyed as many as sixteen years of full-time education. People who have been to university and graduated with first- and second-class degrees. People who have achieved high-paying jobs in advertising and marketing without ever really fully understanding the possessive role of the apostrophe.

The sources for these texts are wide-ranging: they are not simply misprints culled from humble parish magazines. They reflect what I have been reading over the past twelve months. I ended up finding so many mistakes that I thought they would form the basis of a useful workbook for anyone who wants to improve their written English. Not just students of English, but anyone who writes with the hope of someone reading their work – i.e. anyone who writes with the purpose of communication. The examples in this book include professional texts written by employees of major organisations, such as a national broadcaster, an international bank and a popular film monthly. There are also examples adapted from texts produced by smaller organisations, such as a large further education college, a regional tourism marketing group and a specialist publishing company. Amateur texts, written by people who don’t write for a living, are represented by material adapted from the likes of a local folk club’s “What’s On?” flyer, a local carnival brochure and a large cathedral’s weekly newsletter. 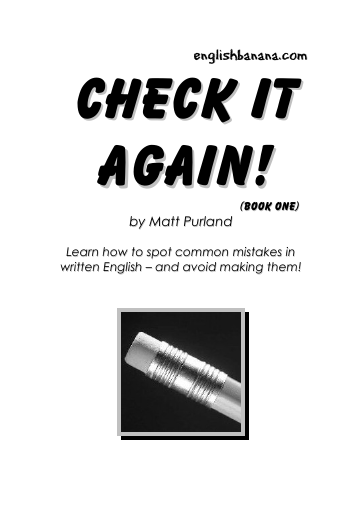